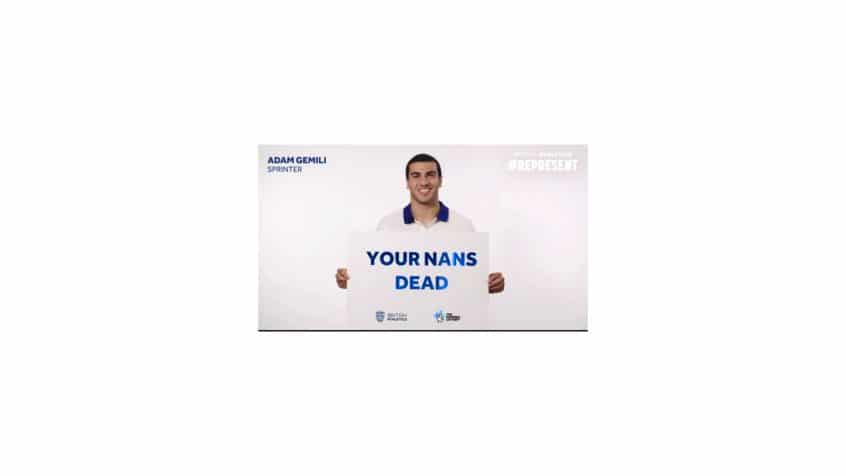 I’m a bit tired this morning as I sat up ‘til gone 1am watching the National Lottery Twitter account self-combust. They’ve deleted everything now but I’m sure a lot of people have screenshots.  I don’t understand why, in a nation that voted to name a boat Boaty McBoatface (I won’t even mention Brexit) and just a matter of weeks after Walkers were stung with their Walkers Wave campaign, a brand would do any sort of user generated content campaign without human moderation.

Just to bring you up to speed incase you missed it, the National Lottery were running a campaign called #Represent where you could retweet them and you would receive a personalised message back held on a board by an athlete.  People changed their names on their twitter account so that they were pulled through instead. Now I am sure that the National Lottery did set up some automated moderation to block swear words but that just isn’t enough these days.  Launching a campaign like that is basically laying down a challenge to people to find a way to break it. You have to have humans moderating it! Now some of the things that people came up with were funny – see the screenshots below. But they were also putting terrible things that were racist or making fun of fatal events. If I was one of those athletes I would be devastated to be pictured holding up some of those signs. 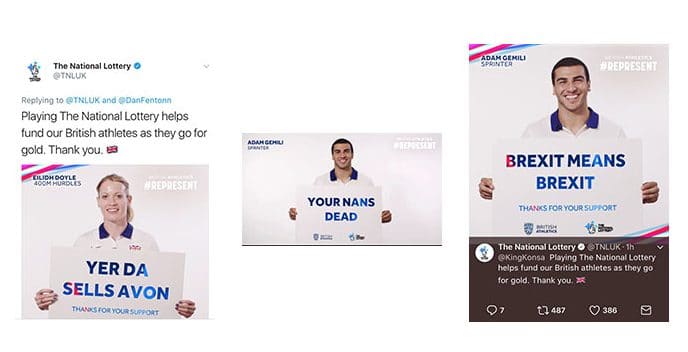 If you want to get people involved and engaged in a campaign then you need an idea that will capture their imagination in the right way. The way that users engage shows what they think of your campaign idea and maybe even your brand. They made the National Lottery look stupid last night and although everything has been deleted, they still need to review what that means for them as a brand. I saw a great talk at Social Media Week a couple of years ago about Brand Love in the time of Tinder. They were saying that there are actually multiple types of brand love, we don’t all need to be striving for this monogamous, long term relationship, the odd one night stand or fling is ok. We should bear that in mind when we create campaigns too.

Just because there are all these new digital channels through which we can communicate, doesn’t mean we should lose sight of what marketing has always and will continue to be about. Think about your objective – what do you want people to do? In the National Lottery’s case, I assume their ultimate objective is to sell more tickets. And I understand that to do that, they wanted to show people that the ticket price isn’t just a punt on a brighter future for yourself but that even if you don’t win, some of the money funds other people’s dreams and contributes to our society. That’s great, but maybe they could have used videos of the athletes saying that without it being a personal message? People know they are automated anyway so it doesn’t really feel that special and it is just massively open to abuse.

So whenever you are thinking about an engaging campaign for social, start by thinking how it could go wrong and definitely have people involved in the moderation as well as a blocked word list!  Finally this is yet more proof that you have to be constantly monitoring social media, it took them a couple of hours to get on the case and delete the posts. If they had social listening properly set up with notifications, they could have nipped it in the bud much quicker. Social is a 24/7 job these days which means a change in the way businesses are managing it – but that’s for another blog!