I’ve had a traumatic experience today – my iPhone 6 has inexplicably died. But it has been an important lesson. If ever you have any doubts about the importance of mobile when planning communications, brand platforms or marketing, may I suggest trying to get through a few hours without your phone?

I was at a client’s office for meetings this morning. My phone was at about 90% battery when I left the house. I used Apple Pay on the bus and tube, checked my email and listened to Spotify to pass the journey. I put my phone to one side in the meeting and when I went to check it in a break, it was off and wouldn’t switch on. No problem I thought, I will just charge it. But horror of horrors, when I plugged the charger in, nothing happened. This has happened before when the battery has been totally drained so I waited a while hopefully but still nothing.

Still not completely in meltdown, I decided to go to the nearby Regent St Apple Store after my meeting. The guy who greeted me tried to turn it on and reset it to no avail so directed me to the Genius area. After a while standing in a non-appointment queue I was told that the average wait would be 5 hours! Desperate to get it fixed I asked if there was anywhere else I could go – he showed me the nearest approved Apple repair centre on his iPad – I instantly went to take a photo of it and then realized I couldn’t. Then it dawned on me that I wouldn’t even be able to use Google Maps to navigate there! So he showed me the map on his iPad and I tried to memorise it. The first issue was not knowing which way to head – normally I follow the blue dot and that helps me orientate myself! Luckily there are quite a few maps on Regent St so I made it to the other shop. A much shorter queue there but no real help as they would need to send it away.

I decided to head home where I knew I had my old iPhone 5 to fall back on. But I thought I should phone my Mum (the only number I know off by heart) so that she wouldn’t be worried if she couldn’t contact me – we normally what’s app through the day and I had said I would call her after my meeting. The first phone box I tried didn’t even have a dial tone. It’s actually pretty tricky to get in one without touching anything! Then I thought I would go to Leon and get lunch then use their wifi on my macbook to phone her on Skype. I bought my food but there were no seats so I ended up moving on. Now carrying a bag of Leon food, I didn’t feel I could go into Starbucks etc so went back to the phone box plan. The second one I tried kept spitting my coins out but did take credit cards. I felt like people were staring as they walked past the box – it’s true that you don’t really see people in them anymore! Anyway I made the call and it went to answerphone – but at least I left a message to explain what had happened. 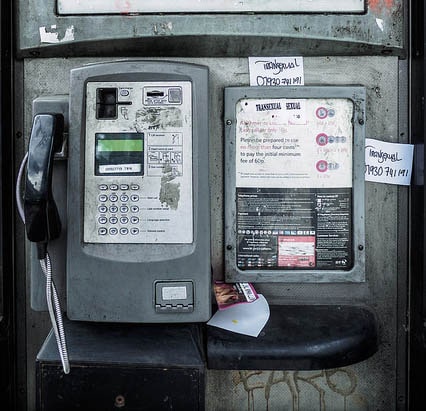 Thank goodness Clinique have a pop up shop in Piccadilly Circus station – I saw their alcohol gel on their make up stations through the window and asked them if I could have some. At least that way I dared eat my Leon without fear of the bacteria from the phone box!

The journey home was primitive – had to use just a contactless card to access the tube and then sit in silence earwigging the chat around me for entertainment. Even thinking about writing this blog, I couldn’t write notes in my phone or take a photo of the phonebox! I use my phone in so many ways usually.

I’m so glad I have a spare phone at home. I’m going to a wedding in Bedfordshire this evening and can’t imagine making that journey without my travel apps for train times on the way there and Uber on the way back, or the entertainment of Spotify and social media, or the camera to take photos! I honestly can’t remember what I did before smartphones.

Leave them out of your plans at your peril!